2009 Winners and Finalists celebrate with Senator Kate Lundy (centre back) 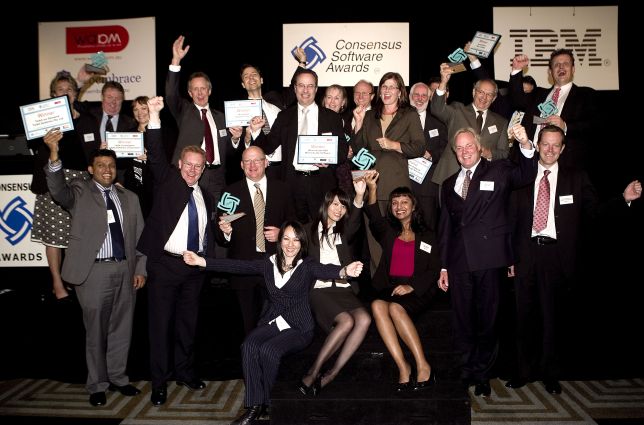 THE WINNERS AND JUDGES CITATIONS OF THE 2009 CONSENSUS SOFTWARE AWARDS ARE:

Ever been frustrated by having to wait while one government department exchanges relevant information about you with another? AccessPoint by Hyro may spell the end of those frustrations. This product, with its cleverly designed and well managed taxonomy of government services, connects the various government and non-government departments seamlessly and electronically, via a variety of channels, in the most efficient and timely manner. Built on the solid IBM Websphere platform, this service has the flexibility to be installed locally or offered as a SaaS, thereby making it accessible to both the largest and smallest of organisations.

AccessPoint is already connecting a vast number of services, both government and non-government, in various states of Australia and in the federal sphere too. A recent sale into a UK organisation represents the first foray into the vast international market. With the untapped local council market and other non government organisations, the judging panel had no doubts that this product from Hyro satisfied the three central requirements of a Consensus award: it is innovative, it already has proven market performance and the potential is clear for all to see.

Jade Investigator is a real time, integrated visual analysis environment that provides detectives with a powerful and much needed criminal analyst capability. Jade Investigator automates and supports many of the processes that underpin a successful investigation team, allowing team leaders to effectively manage tasks, people and information. A key benefit of the system is the ability to visualise connections within a vast amount of seemingly unrelated data captured and maintained in silo-based policing systems.

Developed initially for the Australian Federal Police, Jade Investigator has successfully cracked the tough international law enforcement market and is beginning to enjoy widespread success in North America, Asia and Europe. With an established client base of 40+ agencies in 18 countries, including the US DEA and New Scotland Yard, the product is well positioned for diversification into other industries such as insurance, banking & finance, airline ticketing and retail.

To many, the area of modeling appears abstract and even irrelevant to the ‘real world’. There is in fact, a clear and valuable market for such tools when complexity is high, many people need to understand that complex landscape, collaborate, and subsequently base decisions on their understanding of those models. This is where models and modeling tools come into their element. Modelpedia focuses on one, largely underprovided area of modeling: namely the social and collaborative aspect. Modeling is supposed to be a collaborative, shared activity, yet tools to date can only be used by one person at a time.

The typical cycle of workshop – publish – re-workshop for feedback (and of using lots of emails to exchange feedback) is cumbersome, asynchronous and prone to error, since the commentary is separate from the model itself. This is how Modelpedia helps. By associating feedback and commentary directly onto the model and actually in the model, the loop of model-feedback-model change is made that much more efficient and effective. Modelpedia explores this area now with strong browser-based modeling capability (which alone pushed the product into the innovative territory), and the vision of bringing WIKI culture and function (which is open, flexible and collaborative) to an area which is traditionally individual and difficult to collaborate with, is commendable and exciting.

By developing a software application that enables the sharing of a vast array of digital content such as workforce scheduling, GIS maps, photographs, graphics and company rules between mobile field workers and back office personnel and systems, Retriever Communications has brought to the market a new level of efficiency and occupational health and safety. This is a company that knows its customers and is equipping them with the tools they require to increase productivity whilst driving down the cost of doing business.

The Judges were impressed with STR’s ability to empower major information providers to dynamically deliver useful and customised information in a timely and accurate flexible manner whilst simultaneously managing the cleansing of confidential data in real time.

With the every increasing growth in compliance and risk regulation, organisations will have an increased need to manage this complexity and exposure in an easy and cost-effective manner. The Judges at the 2009 Consensus Software Awards felt that Tickit System’s Tickit on Demand product meets that requirement very well. Providing the system as Software as a Service (SaaS) and using open source software has certainly enabled the cost effective part of the equation, while a flexible yet structured approach based on globally accepted risk management standards also allows organisations to easily define and implement a customised system without the need for expensive bespoke software development. While the product has only been in the market a short time, customer growth and quality has been strong from the outset and the Judges were also impressed by the company’s customer retention and its strict focus on its core business.

WhereScape Red has demonstrated innovation by providing their customers a tool and a methodology to prototype, build and enhance Data Warehouses quickly and simply. In designing the product, WhereScape Red has recognised that Data Warehouses are dynamic and “speed to change” and “speed to value” is paramount in providing meaningful and useful data to an ever changing set of business demands. The result is a product that is much more than an ETL (Extract, Transform, Load) tool -WhereScape Red with its integrated meta data repository manages the complete Data Warehouse lifecycle process including self documentation and scheduling.

For organisations who have established Data Warehouse management tools, WhereScape Red can provide a very fast and effective prototype environment to help formulate robust business requirements in an environment that has been notoriously difficult to do so in the past. Wherescape Red has an impressive array of established customers in New Zealand and North America with 300% growth being experienced in Australian and European markets.

THE FINALISTS OF THE 2009 CONSENSUS SOFTWARE AWARDS ARE:

All Consensus Award programs are based on an open nomination process. Nominations are welcomed from individuals and organizations with experience of the product or service concerned. Before nominating a product please consider the aims of the program and the judging criteria against which the product will be measured. Self nominations welcome.

THE AIMS OF THE AWARDS

The Awards exist to reward excellence in Australian and New Zealand software design and to grow and strengthen software development in Australasia. Award recognition can be vital in building the credibility and exposure necessary for locally developed products to break into new markets. The Consensus Software Awards have been developed to provide this credibility by using an open and transparent judging process based on the Consensus Model.

To achieve a Consensus Software Award, the product must be Australian or New Zealand designed and developed and be judged by the invited panel of judges to be Innovative, deliver performance benefits to the user, and have further potential for product or market development. Entrants are invited to present the evidence to the judging panel first through a written and then by direct presentation. Since each product is assessed directly against the judging criteria there are no categories and the judges may recommend as many or few Awards as they deem to be worthy each year.